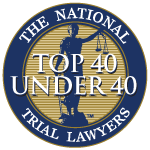 Lucas has been selected to the The National Trial Lawyers: Top 40 under 40. This is a professional organization composed of the top trial lawyers from each state or region who are under the age of 40. Membership in The National Trial Lawyers: Top 40 under 40 is by invitation only and is extended exclusively to those trial lawyers practicing civil plaintiff and/or criminal defense law.

Lucas Griffin has dedicated his legal career to representing injured clients. He is licensed in both Alabama and Georgia. Before joining the team at Gary Martin Hays and Associates, he spent several years with a well-known law firm in Birmingham, Alabama handling a variety of injury claims. He has handled cases from their inception through to trial and/or settlement in State Court, Federal Court and with the American Arbitration Association.

Lucas is a former teacher and believes in the importance of educating clients through each step of their claim.

Lucas is a Gwinnett County native. When away from the office, he can be found spending time with his family and cheering on the Georgia Bulldogs.

Lucas has found success in and out of the courtroom and has represented clients in trials resulting in multi-million dollar verdicts. Also on several occasions, Lucas has been featured as a speaker lecturing to other attorneys on methods to maximize their cases.

Lucas is a member of the Alabama Association for Justice as well as the Georgia Trial Lawyers Association.