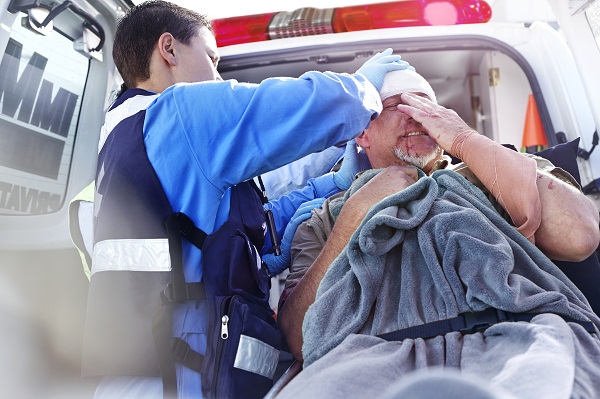 Any break in the cranial bone is considered a skull fracture. Only a major impact or blow to the head can crack the skull, and motor vehicle crashes are certainly one of the main types of ways this injury happens.

A skull fracture from a car accident can be caused in a multitude of ways:

Treatment for a head fracture depends on the severity of the injury. Additional care may be needed if the brain was injured in the accident as well.

A skull fracture injury is not always obvious. Be on the lookout for symptoms that may indicate a fracture:

Less severe symptoms may also appear, particularly in conjunction with a concussion or traumatic brain injury:

The cranium is composed of 16 bones: eight major and eight auxiliary. In a car accident where a person strikes the steering wheel or windshield, the bones on the front of the skull — the frontal (forehead), maxillary (nasal bones), and zygomatic (cheekbones) — are the skull bones most likely to be injured. 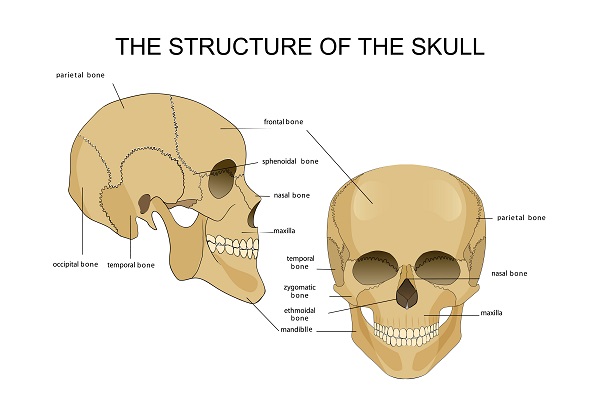 The type of skull fracture a person suffers in an auto accident depends on the force of the crash, the impact location on the skull, and the shape and material of the object impacting the head.

Also referred to as a simple fracture, a closed fracture means that the skin covering the injured area isn’t broken or cut. There may be swelling or tenderness around the area of impact.

Also referred to as a compound fracture, an open skull fracture features broken skin with the skull or pieces of the skull pushing through.

With a depressed head fracture, the skull is dented, pushing inward into the brain.

A basilar fracture affects the frontal and bottom parts of the skull. The fracture may affect the smaller bones around the eyes, ears, nose, or top of the neck.

With a linear head fracture, the skull breaks in a relatively straight line.

Comminuted head fractures are when a piece of the skull breaks into three or more sections.

A fracture occurs along the skull’s sutures. Sutures are the lines between the bones that fuse together during childhood. This type of fracture is most often seen in newborns and infants.

An occult fracture means the injury is hidden or does not appear clearly on an X-ray. Other imaging tests will be needed to confirm the exact location of the fracture.

Can Skull Fractures Cause Brain Bleeds?

If the impact was heavy enough or an object penetrated the skull, then a brain bleed can occur due to a fractured skull. A brain bleed (also known as a contusion) happens when blood pools around the area where the head was struck. Bruising, swelling, pressure, and pain are some of the indicators that there may be a brain bleed.

Skull fractures are managed differently compared to other fractures. In most cases, skull fractures can heal on their own and medication can be used to manage the pain.

The doctor will check a patient’s cardiac and pulmonary functions before conducting a neurological exam. Shining a light on the pupils can tell a physician if any large lesions have formed.

Unless a fracture is open and severe enough to require immediate neurosurgery, a doctor will order a variety of imaging tests to get a clear understanding of what kind of fracture was caused by the accident. X-rays provide a basic image of the skull; MRIs take images of both the bone and soft tissue; and CT scans produce a 3D image of the fracture and any damage to the brain.

Do not try to treat a skull fracture on your own — you don’t know how severe the damage may be. Seek medical treatment immediately, especially after a car wreck.

Some breaks, such as a basilar skull fracture, may require surgery if there is leakage of the cerebrospinal fluid from the nose or ears. A depressed skull fracture may require treatment because they have difficulty healing on their own and often put pressure on the brain.

What If the Car Accident Wasn’t Your Fault?

If you were involved in a car accident or other type of crash that was caused by another driver, you shouldn’t have to pay for your medical treatment or car repairs. The other driver’s insurance should be the one that takes care of the bills due to their insured’s negligence.

In a perfect world, the insurance company would be understanding and seek to help you out while you recover from your head injury. But they often resist. They may try to delay covering your medical bills or downplay your injuries even though you know you’re in pain.

A head injury after a collision always needs to be taken seriously from the start. If you’ve been diagnosed with a skull fracture, had to have neurosurgery to repair a head wound, or are worried about treatment because you don’t have health insurance, talk to our Atlanta personal injury lawyers today.

We specialize in brain injuries and traumatic fractures caused by car accidents. Call Gary Martin Hays & Associates at (770) 934-8000 to get the help you need fast.