Workers’ Compensation and Wage Benefits Explained by a Lawyer 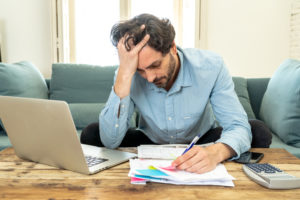 Under Georgia’s workers’ compensation system, there are three types of benefits an injured worker may be eligible to receive. These are:

Too many times, people assume that you are also able to receive money for pain and suffering and emotional suffering — benefits to compensate an injured worker for all the hassles they have endured and will endure because of their on the job injury.

Benefits will vest beginning with the eighth day of disability. If the injured worker is disabled for 21 consecutive days, then the employer/insurer must pay the employee for the first seven calendar days of disability.

The employer does have the option, though not an obligation, to continue paying the employee regular wages during the disability period. If this is done, no workers’ compensation indemnity benefits are due.

The usual method for calculating the average weekly wage is as follows:

What happens if the injured worker did not work a substantial part of the 13-week period immediately preceding the on-the-job injury? The law instructs the employer/insurer to calculate the average weekly wage using the wages of a “similarly situated employee” that has worked the 13-week period. If neither method can fairly or reasonably be applied to calculate the average weekly wage for the employee, then the “full-time weekly wage of the injured employee shall be used.”

It is interesting to note that Board Rule 260(a) provides a more expansive list of items that may be included in calculating the average weekly wage:

“Computation of wages shall include, in addition to salary, hourly pay, or tips, the reasonable value of food, housing, and other benefits furnished by the employer without charge to the employee which constitute a financial benefit to the employee and are capable of pecuniary calculation.”

However, the Court of Appeals has ruled that the term “average weekly wage” does not include fringe benefits under O.C.G.A. Section 34-9-260 though Board Rule 260 authorizes this. If there is a conflict between the statutes and the board rules, the statute trumps the Board Rule.

In the case of Groover v. Johnson Controls World Service, Groover was injured and was disabled for a long enough period of time that the employer/insurer was required to commence indemnity benefits. The employer/insurer took the wages for the 13 weeks immediately preceding his on the job injury and calculated his average weekly wage.

The employer/insurer did not take into account a shoe allowance the employee received, nor did they factor in the value of the employer’s contributions to his health insurance. A hearing was requested for the failure to calculate the correct average weekly wage. The administrative law judge agreed with Groover and recalculated his average weekly wage to include the benefits. This increased the amount of his weekly indemnity benefits.

The Full Board reversed because the reimbursements “do not result in the receipt of funds which can be spent by the recipient.” The Superior Court affirmed the Full Board’s decision. The Court of Appeals affirmed, writing that “we have found no reported Georgia judicial decision so broadly construing the O.C.G.A. Section 34-9-260 definition of ‘average weekly wage’ to encompass an employer’s direct payment to an insurance provider for health benefits.”

The court also addressed the conflict between the Board Rule and the statute, stating “[A]lthough the wording of a Board Rule has significance, such language cannot be used to supersede or replace express statutory language to the contrary.”

There are two types of indemnity benefits under Georgia’s worker’s compensation system:

TTD benefits are due when the injured worker has been totally disabled by the authorized treating physician for more than seven days. O.C.G.A. Section 34-9-261 as of July 1, 2014, provides:

“While the disability to work resulting from an injury is temporarily total, the employer shall pay or cause to be paid to the employee a weekly benefit equal to two-thirds of the employees average weekly wage but not more than $525.00 per week nor less than $50.00 per week . . .”

What happens if the benefits are not paid in a timely fashion? The employer/insurer will be subjected to a penalty. There is a 15% penalty assessed onto the amount of the accrued income benefits which are late. The State Board of Workers’ Compensation considers payments as being made when mailed within the state to the address specified by the employee or to the address on record with the board, or when it is electronically transferred to an account specified by the injured worker.

What is a “catastrophic” designation? Your claim could be considered catastrophic if your injury involves one of the following:

If your injury falls in one of the first five categories, the catastrophic designation is automatic. Most of the litigation as to whether or not a claim is catastrophic centers on the filing category of “any other injury . . .” The injured worker has the burden of proofing that his injury qualifies under this category as catastrophic.

The employee and his attorney will often have to provide very extensive medical narratives and opinions, as well as testimony from a vocational expert as to the employability of the injured worker in the national economy. The employer/insurer will naturally try and counter the medical evidence with reports from their doctors and a vocational expert.

An award for Social Security Disability benefits can also play an important role in determining whether an injury is catastrophic. This Social Security decision that either grants or denies disability benefits shall be admissible in evidence and the Board is directed to consider it in their evaluation; however, no presumption shall be created based upon this award regarding a catastrophic designation.

It is important for the attorney for the injured worker to get very clear medical evidence from your treating physicians about your work restrictions.

TPD benefits are due when an employee returns to work after an injury, but is unable to earn a gross weekly wage equal to what he was earning before the accident because of his injury and work restrictions.

Under the statute, the employer/insurer are to pay the injured worker 2/3 of the difference between the average weekly wage before the injury and the wage earned upon the worker’s return. As of July 1, 2014, the maximum amount of the TPD benefits to be paid is $350.00 per week.

The injured worker’s average weekly wage in the 13 weeks immediately preceding the on the job injury is $600.00 per week. They are totally disabled for a period of time and receive Temporary Total Disability (TTD) benefits in the amount of $400.00 per week.

After a period of time, the authorized treating physician (ATP) releases the injured worker to light-duty work and the employer has light-duty work available within the doctor’s restrictions.

Going back to work with light-duty restrictions can be the step in the right direction for most injured workers. They can use the increased money from their paycheck and have it supplemented with the TPD benefits from worker’s compensation as they work to fully recover from their injuries. This is especially true in situations where the employer values the employee and really wants to accommodate them and their restrictions.

But what happens in those situations where the employer/insurer is less than civil with the injured worker and tries to get the employee to return to work on a light-duty job but the employer’s definition of “light duty” does not necessarily agree with the authorized treating physician’s view of “light duty?”

The legislature addressed this issue by passing O.C.G.A. Section 34-9-240. The statute is further explained by Board Rule 240. Whenever the authorized treating physician releases an injured worker to light-duty work and the employee has been out of work receiving TTD benefits, the employee does not have to return to work until the employer/insurer does the following:

The better practice is to make sure the employer/insurer complies with the requirements of O.C.G.A. Section 34-9-240 and Board Rule 240 before you attempt a light-duty job.

Please note that TPD benefits are also not designed to continue indefinitely. The underlying purpose of Georgia’s workers’ compensation system is to get the injured worker back into the workforce as quickly as possible. TPD benefits are limited to a maximum of 350 weeks from the date of the injury.

Take Control of Your Future

Filing for workers’ compensation is complicated and time-consuming. Your employer suddenly doesn’t care about you and the insurance company just sees you as another number. But it doesn’t have to be this way.

Our compassionate workers’ compensation lawyers and case managers work with you to get the best outcome for your case, make sure you are getting paid the full amount of wage benefits you are owed and are not forced to go back to work until you are ready.

This is Part 1 of the Georgia workers’ compensation benefits series.

Part 2: Workers’ Compensation and Medical Benefits Explained by a Lawyer