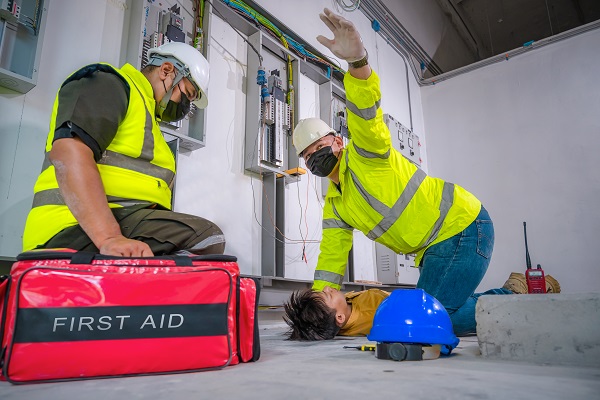 While electrical injuries on the job are rare, they have a high morbidity rate due to the rapid trauma inflicted on the body. Even if a worker survives contact, they may suffer long-term damage that affects multiple tissues and internal organs.

Nearly all electrical accidents and injuries are preventable. When safety procedures are ignored — or workers are improperly trained — injuries are bound to occur.

Workers injured in electrical accidents or family members who have lost a loved one to electrocution can apply for workers’ compensation benefits. Follow these eight simple steps to protect your rights and get the legal help you need.

The Four Types of Electrical Injuries

Electric Shock - Electric shock is a reflex response to an electrical current passing over or through the worker’s body. Severe electric shock injuries may involve internal trauma such as burns, abnormal heart rhythm, and unconsciousness.

Electrocution - An electrical current passing through the body injures the worker so severely that it results in a fatality.

Falls - Falls can happen when an electric shock causes muscles to contract and a worker loses their balance. An electrical incident may also involve an explosion, flinging the worker from a great height.

Burns - The most common non-fatal, shock-related injury are electrical burns. They happen when a worker comes into contact with energized wiring or equipment. While electrical burns can present anywhere on the body, they most often occur on the extremities (the current flows through the hands and out the feet).

The severity of an electric shock depends on several factors:

Most Common Causes of Electrical Injury and Death

For workers injured by electricity, the means of exposure most often included:

Workers fatally injured on the job were usually electrocuted under the following circumstances:

According to the Electrical Safety Foundation International (ESFI), there were 2,220 non-fatal electrical injuries that required days missed from work in 2020. More than two-thirds of those injured were workers between the ages of 20 to 44 years old.

Occupation has a lot to do with electric injury rates.

Perhaps the most surprising statistic is that most non-fatal electrical injuries occurred after one year or more of employment. The reasons are unclear, but lax safety standards, rushed jobs, or poor planning may be to blame.

Workers are more likely to be electrocuted on a Tuesday (33%) after working four to six hours (32%). This is possibly because workers are exhausted from the day before, and early to mid-afternoon is when most people’s circadian rhythm dips.

In 2020, there were 126 electrical fatalities across the U.S. Nearly two-thirds of electric fatalities occur in service-providing industries, while the remaining 35% happen in goods-producing sectors.

Some data highlights from the infographic above include:

The good news is that the number of fatalities from electrical injuries has been steadily dropping over the past two decades.

A significant number of workers injured or killed by electricity identified as Hispanic or Latino. The group represented 40% of electric fatalities at job sites, even though they only account for 18% of the workforce.

Exposure to high voltage can result in severe injuries. Muscles may release proteins and electrolytes into the blood that damage the heart and kidneys (rhabdomyolysis). Neurological damage may manifest as seizures, tinnitus, paresthesia, weakness, and poor body coordination. Psychologically a victim may develop memory issues, personality changes, depression, and post-traumatic stress disorder.

The injured worker will require a team of doctors such as surgeons, critical care specialists, neurologists, cardiologists, and psychiatrists. They will likely be transported to an emergency room and treated for trauma for an extended period.

Workers injured on the job due to electrical accidents most likely can file for workers’ compensation. Workers’ compensation covers all medical bills and treatment associated with the injury and provides a source of income while the victim recovers.

If you suffered a heart attack; muscle, nerve, or tissue damage; thermal burns; or a fall after contact with an electrical current while working, you probably have a strong case for compensation.

Don’t let your employer and their team of lawyers intimidate you into suffering in silence. Contact our electrical injury lawyers at (770) 934-8000 today for a free consultation regarding your work accident case.