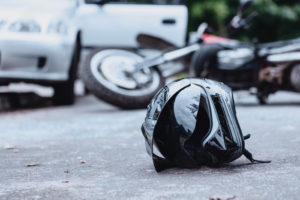 While riding a motorcycle is statistically safer, riders who are involved in crashes are far more likely to sustain severe, life-threatening injuries than drivers of passenger vehicles.

Motorcycle crashes don’t happen often, but when they do, they often leave riders with severe, long-lasting injuries. A crash can also damage or total a motorcycle, creating additional expenses and headaches for the owner.

Head-On Collision - 76% of motorcycle crashes involved with another vehicle were impacted in the front. This type of wreck is particularly devastating and often results in the death of the rider.

Left-Turn Accident - In 42% of fatal crashes, the impact vehicle was turning left and hit the motorcyclist while they were going straight or passing another vehicle.

Sideswipe Accident - In 21% of motorcycle accident cases, both vehicles were going straight. In these types of crashes, the other vehicle often does not notice the motorcyclist and tries to merge or swerve over into the adjacent lane.

Lane Splitting - Motorcyclists who ride between two lanes while traffic is moving or stopped are said to be lane splitting. Not only is this practice dangerous because the rider has less room to maneuver and other motorists aren’t expecting them, but it’s also illegal in Georgia.

Hitting a Fixed Object - 23% of fatal motorcycle crashes involved a collision with a fixed object.

Hit and Run - In some cases, a motorcyclist hit by a car is abandoned. Leaving a person after an accident is illegal and can result in serious fines and imprisonment.

Highside Accident - Also known as a “highsider,” a highside accident can happen when the rear wheel loses traction and violently launches the rider off the bike. This type of accident is extremely deadly as the rider can suffer broken bones and contusions and is left vulnerable to being hit by their bike or another vehicle.

Lowside Accident - Sometimes called a “lowsider,” this can happen when there is too much braking, too much acceleration, or slippery surfaces (water, dirt, gravel, etc.). A lowside accident can cause the bike and rider to slide or skid across the ground. Although this may lead to impact injuries and road rash, it is generally thought to be a safer alternative to a highside accident.

Over at Motorcycle Secure, they researched the top 10 types of frequent motorcycle accidents and the best ways to steer clear of them. This is a great resource for responsible motorcyclists looking for smart ways to stay safe while out on the road.

Due to their exposure, injury rates for motorcyclists are incredibly high if they are involved in a crash. In 2017, an estimated 89,000 motorcycle riders were injured across the U.S.

Common types of motorcycle injuries include:

The CDC found that 30% of all non-fatal motorcycle injuries happened to the legs and feet. The lower legs seem especially vulnerable. Protective boots, pants, and armor can help mitigate damage to these areas.

Torso injuries seem to impact older riders the most. Special jackets with protective padding can shield the back, chest, and shoulders.

Safety should always be taken seriously. Remember ATGATT: All the gear, all the time.

According to the NHTSA, more than 5,100 motorcyclists were killed in 2017. Two-wheeled vehicles were involved in nine out of 10 fatal crashes.

Although motorcycles only make up 3% of registered vehicles, the fatality rate was 27 times that of passenger car occupants. Nationally, motorcyclists make up 14% of all traffic fatalities.

In Georgia, 154 motorcycle riders lost their lives in 2018. More than a quarter of the deceased were between 20- and 29-years-old.

Motorcycle riders involved in fatal crashes were more likely to drive without a valid motorcycle license, had their license revoked or suspended, been involved in prior crashes, and convicted of driving while impaired (DWI) or speeding than drivers of passenger cars and large trucks.

When and Where Motorcycle Accidents Happen Most Often

Statistically speaking, motorcyclists are more likely to be involved in an accident if they are in an urban area, on a high-capacity road, when it’s clear or cloudy, during daylight hours, and on the weekend. This is most likely because the majority of riders live in or near urban areas and prefer to ride on their days off when the weather is warm or clear. 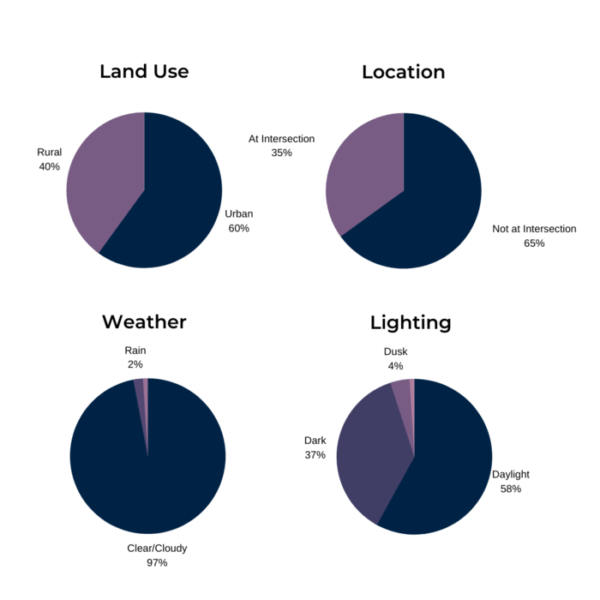 How a Motorcyclist Can Protect Themselves

The single-most effective way motorcycle riders and passengers can protect themselves is to wear a helmet. More than 1,800 lives were saved due to helmet use in 2017. The National Center for Statistics and Analysis estimates that if all motorcyclists had worn helmets, an additional 749 lives would have been spared that year.

Georgia has a universal helmet law, which means all riders must wear a helmet.

Whether you call it a brain bucket, dome or lid, wearing a helmet can save your life. 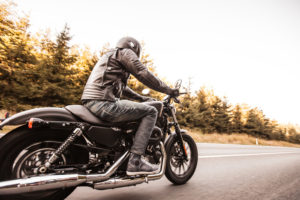 Some motorcyclists involved in fatal crashes were speeding. Speeding can involve racing, driving too fast for conditions on the road, or exceeding the posted speed limit. Recently, there has been a rise in motorcyclists involved in fatal wrecks who tend to ride motorcycles with large engines (1,501 cc or higher). No matter how good of a driver a person thinks they or how high-performing their vehicle is, excessive speeds are almost always deadly.

Operating a motorcycle while drunk or impaired is also a serious issue for many riders. Of those killed in single-vehicle crashes on weekend nights, 61% were alcohol-impaired. Of the 135 riders killed in Georgia in 2017:

The data is clear: the best way to protect yourself, whether you ride an off-road motorcycle, moped, scooter or mini-bike, is to wear a helmet, drive the speed limit, and drive sober.

But even if you do everything right, a car could suddenly turn left and hit you or swerve into the lane you are in and clip the front of your motorcycle.

We understand first-hand the devastating impact motorcycle injuries and fatalities can have on a person and their family. Our law firm has represented motorcyclists suffering from broken legs, fractured wrists, head trauma, and other injuries.

If you have been injured in a motorcycle accident in Atlanta or Georgia, talk to our trusted attorneys about your case. We’ll fight to make sure the insurance company takes your motorcycle injury claim seriously, so you can focus on getting better.

What Is My Motorcycle Accident Case Worth?

An Atlanta Attorney on the Best Ideas to Avoid Motorcycle Crashes