Home » Blog » Types of Airbag Injuries After a Crash

Types of Airbag Injuries After a Crash 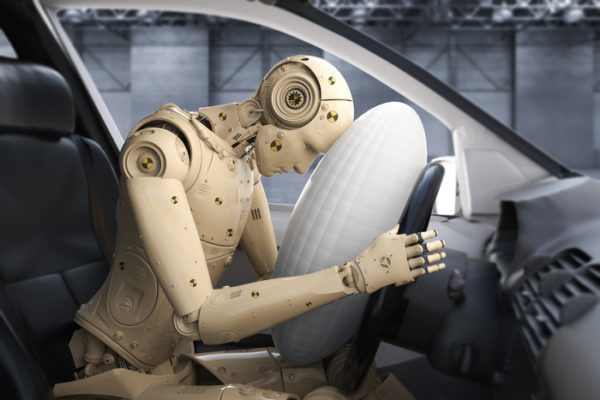 Airbags are one of the primary ways car manufacturers keep drivers and riders safe in case of a car accident. According to the NHTSA, front airbags reduce injury and death in automobile accidents by up to 41 percent.

When combined with a passenger wearing a seatbelt, the risk of death is reduced by 61 percent, compared to just 50 percent with just a seatbelt and 34 percent for just airbags.

It is estimated that airbags save tens of thousands of lives each year in the U.S. alone.

But car accidents are violent events. Even the best safety measures can leave a person bruised or scarred. Airbags created for vehicles before 1998 often inflated too fast in low-speed crashes, sometimes injuring or killing unbelted riders, children, and the elderly.

Fortunately, inflation injuries from airbags today are rare thanks to federal rules. Advanced modern airbags deploy with less force and are capable of sensing the weight of seated occupants.

Airbags are designed to inflate as soon as an impact causes the vehicle to slow down and deflate once contacted by a person’s head. All of this happens rapidly due to sensors and a brief explosion.

The airbag is connected to an accelerometer that detects changes in speed. If the vehicle decelerates at a greater rate than normal braking speed, the airbag circuit is triggered.

The circuit sends an electrical current through a heating element, which ignites a chemical explosive. The explosion causes a harmless gas to fill the nylon bag inside the middle of the steering wheel or side dash.

The bag inflates then deflates when it comes into contact with a person’s head, the gas escaping out the edges of the airbag. The airbag should be completely deflated soon after a crash.

Airbags are designed to work with seatbelts — they should never be used as a substitute.

Hitting an airbag during a wreck happens so quickly you may not be able to recall what exactly happened. It’s only later you realize something hurts. Airbag injury symptoms include:

Chest injuries after a car accident may indicate a fractured rib, internal organ contusions or damage, or heart damage. Seek medical attention immediately and watch for signs of drowsiness or disorientation as this could indicate a traumatic brain injury.

Eye injuries after a car accident, whether or not the airbags deployed, are also reported, especially if a person was wearing glasses. Injuries include orbital fractures, retinal detachment, and lens ruptures.

Faulty airbags can injure people as well. The government issues recalls for faulty airbag systems, the reasons ranging from failure to deploy, incorrect timing, or defective parts. The Takata airbag recall is among the most infamous, affecting an estimated 70 million vehicles. These defective airbags exploded violently when deployed, killing at least 15 people and injuring more than 250.

Further Reading: What You Should Do If You're in a Car Accident While Pregnant

Children seated in the front passenger seat are at increased risk of fatal and non-fatal injuries from airbags. Infants in rear-facing seats may sustain head and neck trauma from bag deployment. Children seated forward-facing at risk of injury during an airbag’s inflation.

Until a child reaches a certain age and weight, they are safest in the backseat. They should not lean against doors or vehicle sides due to a higher risk of injury from side-impact crashes and side airbag deployment.

Protecting Yourself From Airbag Injuries

You can take the following measures to reduce injury from an airbag:

Never place your feet on the dashboard. Many horrific injuries have resulted in passengers who placed their feet on or their knees near the dashboard airbag. Injuries include snapped femurs, broken hips, and dislocated hips. A woman in Georgia had her foot smash into her face, breaking her nose, femur, and ankle.

Airbags deploy between 100-220 mph and car accidents can happen in the blink of an eye. You will not have time to move your legs to a safe position.

What If the Airbags Didn’t Deploy During an Accident?

If airbags don’t deploy in an accident, it could be because the crash happened at low enough speeds that the sensor didn’t trigger the reaction.

However, severe rear-end or front-end collisions in which airbags didn’t deploy could mean the airbag sensors were faulty, the bags had been replaced with off-market versions, or not replaced at all.

If you’re injured due to an airbag failure, it may be the fault of the manufacturer or business who sold you the vehicle. This will need to be investigated right away to ensure evidence is saved and recorded.

Airbags are designed to keep us as safe and as unharmed as possible during a crash. But the forces of an automobile collision can mean even safety features designed to protect can leave accident victims with serious injuries.

Our Atlanta airbag injury lawyers can help you with your car accident and personal injury claim. We handle airbag injuries as well as other serious injuries caused by negligent drivers and businesses.

Talk to us about your wreck and we can start our investigation right away. Call 1 (800) WIN-WIN1 or contact us online.