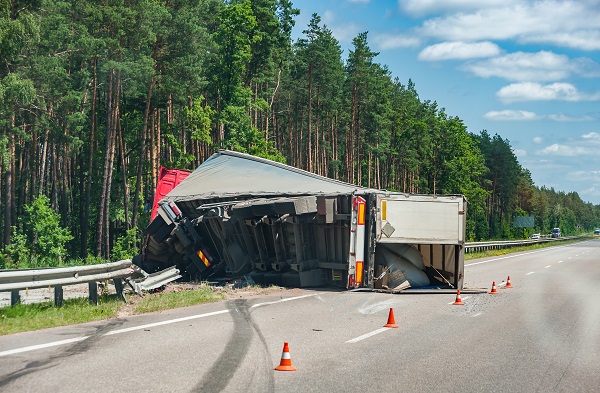 A large truck rolling over is a terrifying event. Yet this event happens with regularity on Georgia roads and highways.

Best case, the truck falls onto its side and slides to a stop with the driver emerging uninjured and traffic backed up for a couple of hours. In the worst-case scenario, the overturned truck crashes into another truck or on top of a smaller vehicle, injuring or killing multiple people.

In this post, we’ll take a look at truck rollover accidents, why they happen, and who’s responsible for compensating the victims after their lives have been turned upside down.

For an immediate consultation about your case, contact our Atlanta truck accident attorneys.

A truck rollover is most often caused by tight curves or turning suddenly, usually to avoid another vehicle or unexpected obstacle on the road. The centrifugal force of the turn causes the truck to lean, which may result in a rollover. Large trucks like tractor-trailers, semi-trucks, cement trucks, and fire trucks are most susceptible to rollover accidents.

Despite their rarity, rollovers were found to be responsible for a high number of fatalities, particularly for large truck drivers and their occupants (Claims Journal).

The Federal Motor Carrier Safety Administration (FMCSA), which regulates large vehicles in the U.S., studied 239 crashes in which a truck rolled over. The in-depth analysis revealed some of the main reasons why large trucks overturn.

Speed was the most significant factor in rollover crashes. Nearly half of large truck rollover crashes resulted from speeding around curved roads (usually at on- and off-ramps).

There are two ways rollover crashes happen on a curve due to speed. The first is when the front wheels of the truck turn faster than the cargo it's carrying. The second is traveling at speeds (particularly on interstates and highways) that are unsafe for the conditions of the road.

Truck drivers were found to often misjudge the speed at which a curve could be taken; be in a hurry and disregard the speed limit (or fail to notice it); or lose their temper in response to other drivers.

Speed may also be excessive in terms of driving circumstances. Some large truck drivers failed to adjust their speed to account for the following:

Whether due to misjudgment, being in a hurry, overloading, or making a last-second decision to switch lanes, none of these reasons excuse a truck driver from causing a rollover accident that injures another person.

The second major contributor to rollover crashes involved inattention. Large truck drivers dozed, fell asleep, or took their eyes off the road to look at something else, all resulting in situations where the vehicle made a sudden turn in direction and flipped over.

The third factor in large truck rollover accidents involved steering and errors in control. Drivers either over-steered, did not steer enough to stay in their lane, or over-corrected when counter-steering to remain on the road.

Lesser causes involved in controlling the motion of the truck include failing to maintain a safe distance from a vehicle ahead, responding to vehicles or road conditions incorrectly, failing to downshift to control speed, and braking improperly.

The truck, the load, and the driver’s mental and physical condition should all be in top shape before hitting the road.

Some drivers failed to take into account their truck loads’ weight, height, or secureness. Large trucks which are top heavy or carrying poorly distributed or unsecured loads are more likely to suffer a rollover crash. Making sure the load is properly secured before setting out can help prevent rollover collisions.

Part of maintaining a vehicle is driver health. In rare cases, truck drivers lose consciousness due to physical ailments or medication and lose control. Drivers should take steps to prevent health issues from arising behind the wheel.

All that said, the fifth factor that can cause a truck driver to veer off-course is other drivers. A large truck may be struck by another truck or passenger vehicle during a lane change, when passing through an intersection, or when swerving to avoid a collision. In rare cases, a driver overturns their vehicle in an attempt to avoid a crash.

Who Is Liable for Damages After a Truck Rollover Accident?

It is the driver’s responsibility to check their vehicle and make sure it is maintained up to safety standards. Failing to do so means they may be liable for any injuries and damages that occurred in an accident.

In most cases, the legal liability for the crash will be passed on to the trucking company’s insurance carrier. The insurer will bear the obligation to compensate the injured victims for any medical costs, missed paychecks, and property damage.

One or more of the above parties could be held liable after a truck rollover. Consult with an experienced truck accident lawyer who knows how to investigate these types of crashes.

While rare, truck rollovers can and do happen. They bring with them a high risk of severe injuries and death.

Consult with one of our rollover accident attorneys about your case. We immediately begin the process by protecting all evidence from the crash and compiling a list of potentially liable parties to investigate.

Once we narrow down the responsible parties, we identify the insurance funds that can pay out and negotiate for the maximum compensation you need to cover medical expenses and future care.

If you have questions about your legal rights after a truck rollover accident, contact Gary Martin Hays & Associates today. There’s no cost to sit down and speak with us, and doing so may help you pick up the pieces and move forward with your life.