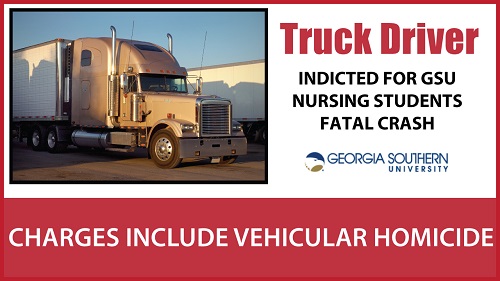 The truck driver accused of causing the fiery crash that took the lives of 5 Georgia Southern University nursing students was indicted recently in court.

According to the AJC, the driver was indicted on nine counts, including five counts of first-degree vehicular homicide, serious injury by vehicle, reckless driving and following too closely.

Total Trucking, the driver's employer, was also indicted on five counts of same charges and criminal responsibility of corporations.

In April of 2015, the young women were traveling in two cars to Savannah when the deadly pileup occurred on I-16.

Prior to the wreck, the driver had been texting on his cellphone and was at the end of his shift, according to some of the families attorneys.

Some witnesses claim the truck driver made no effort to stop or slow down, impacting the two vehicles occupied by the nursing students at approximately 70 mph.

In these cases, one critical piece of evidence to analyze is the truck driver's log.

This log reflects when the truck driver starts his day, all stops along the way, and certifies that he has inspected his tractor and trailer.

These logs can be used as evidence to show the driver was speeding between his last stop and where the wreck occurred, or that he suffered from driver fatigue because of too many hours on the road.

Claims against a trucking company can be very complex, and they have many legal issues that need to be investigated right away.

If you've been injured in a truck accident, Then learn more about your rights, fill out our FREE CASE EVALUATION.

Truck Accidents: How do I prove truck driver negligence?