Herbicide in Roundup Linked to Cancer 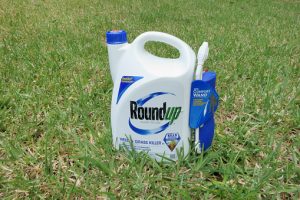 A recent report has linked Roundup, one of the most popular herbicides in the world, to non-Hodgkin's lymphoma, a type of cancer. Roundup is frequently used as a weed killer for gardens and lawns by homeowners, landscapers, farmers, groundskeepers, and commercial gardeners.

Created by Monsanto, the herbicide began selling in 1974. Its primary ingredient is glyphosate, a chemical that blocks proteins plants need to grow. Glyphosate is highly effective at killing many different types of weeds, including crabgrass, clover, and dandelions.

When crops like soy, corn, and cotton were genetically modified to resist Roundup, agricultural use of the herbicide skyrocketed. According to the Environmental Protection Agency (EPA), about 300 million pounds are used on farms and lawns across the U.S.

Across the world, 1.4 billion pounds of glyphosate is used in 160 countries annually.

Roundup comes in dozens of varieties like Roundup Concentrate Max Control, Roundup for Lawns Ready-to-Use, and Roundup Poison Ivy. There are also several other brands and generic knock-offs which use glyphosate in their products.

In 2015, the World Health Organization's (WHO) International Agency for Research on Cancer (IARC) listed glyphosate as "probably carcinogenic to humans," citing evidence of non-Hodgkin's lymphoma in humans who were exposed to glyphosate in the U.S., Canada, and Sweden going back as far as 2001.

Non-Hodgkin's lymphoma is cancer that develops in a type of white blood cell called a lymphocyte. Lymphocytes originate in the lymphatic system, a network of nodules spread across the body that produce disease-fighting cells.

Symptoms of non-Hodgkin's lymphoma may include:

Left untreated, the cancer may spread throughout the lymph node system, eventually reaching nearby organs such as the spleen, lungs, liver or bones.

Research limitations on the effects of glyphosate on humans mean there is virtually no information or data in the U.S. on its effects. But what few studies have been done suggest a potential link between non-Hodgkin's lymphoma and glyphosate.

Other non-cancerous effects of glyphosate may include reproductive problems, abnormal fetal development, low birth weights, miscarriages, and damage to the liver and kidneys. These health risks have moved some countries to ban the herbicide altogether or impose restrictions.

The EPA is reviewing glyphosate to determine if products like Roundup need to come with a carcinogen warning on their labels.

In 2016, dozens of Roundup lawsuits were filed by farmers and landscapers against Monsanto in the United States District Court in northern California. They claim exposure to glyphosate caused them to develop non-Hodgkin's lymphoma.

Today, there are more than 5,000 cases nationwide in state courts alleging that Roundup causes cancer.

If you or someone you know works with or near large amounts of Roundup and they have been diagnosed with non-Hodgkin's lymphoma, they may have a claim against Monsanto. Jury trials begin next year for many cases so do not delay consulting our attorneys at Gary Martin Hays & Associates regarding your legal rights!