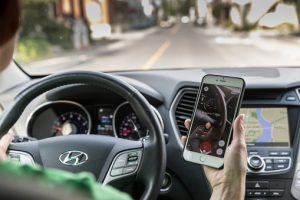 Distracted driving is one of the biggest risk factors for car accidents, as drivers using phones and infotainment systems tend to take their focus off the road. Unfortunately, there is now another new distracted driving accident risk to add to the long line of high-risk behaviors like texting or using Facebook while behind the wheel. The new risk comes from the rising popularity of Pokemon Go.

WSB-TV Atlanta reported recently on the dangers Pokemon Go presents to drivers. According to WSB-TV Atlanta, a police body camera recently caught a distracted driver playing the game as the driver crashed directly into a parked police patrol car.

There were three officers standing next door to a police cruiser early on Monday morning when the accident happened. An SUV can be seen approaching the officers on the body camera the officer is wearing. Within a few seconds, the police officer's body camera shows the SUV swerving. When the SUV swerved, it side-swiped the side of the police cruiser.

There were no injuries reported in the incident, and the driver was not identified in the 90-second video. Law enforcement officers did not indicate to the news whether the driver was going to face any charges in connection with the distracted driving accident. In a news conference, a law enforcement official commented the collision could have been worse. A public information officer said: "It's a game, but it's not a game when you're behind the wheel. This could have easily, easily been a tragedy."

The accident was one of several distracted driving accidents which have been reportedly linked to Pokemon Go. While none of the accidents have caused serious or fatal injuries yet, it is only a matter of time until a driver who is distracted by the game hurts someone badly or causes a fatality.

The game encourages people to go out and look for Pokemon, which means it is highly likely many people will be in their cars in order to play the game. If these motorists are driving while also looking at their phones to try to play the game, they will not be able to focus appropriately on the road. If they cause an accident to happen, they can be held accountable for resulting harm. Drivers need to leave their phones off, or give them to passengers to look for Pokemon, so the driver can stay focused on road safety.