Motorcycle Accidents with Trucks and Buses 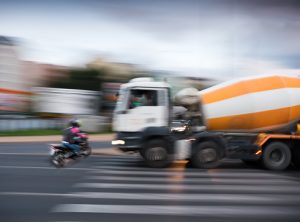 Motorcycle accidents are far too common and are often deadly. Just recently, a 42-year-old motorcycle rider in Atlanta was killed in a collision with a MARTA bus. The bus was traveling north on Washington Road at approximately 5:30 AM. AJC reports a MARTA spokesperson indicated the motorcyclist hit the bus head-on. A passenger aboard the bus said the bus driver had no opportunity to try to swerve to avoid the motorcycle because it was going so quickly.

The victim became pinned under the front of the bus after the motorcycle accident. He was pronounced dead at the scene of the crash. The driver of the bus was transported to Atlanta Medical Center South to undergo mandatory testing. There are four people who were aboard the bus at the time of the incident, none of whom sustained injuries.

While the recent motorcycle accident is still under investigation, the early witness reports seem to indicate it was the driver of the motorcycle who crossed the line and caused the accident.

In many other situations, however, it is not the motorcyclist but others on the road who end up making a careless choice and causing a crash to occur. When the accident involves a truck or a bus, the consequences are likely to be very serious or deadly for the motorcyclist because a truck or bus is so much larger than a motorcycle.

If the driver of the truck or bus was the one responsible for causing the accident, the motorcyclist or his surviving family members would need to know the law for taking legal action to recover compensation. Motorcycle accident injuries can be serious and can cost a substantial amount to treat. If the motorcycle accident injuries were fatal, wrongful death damages can also total many thousands of dollars as dependents and close family members can receive compensation for lost companionship and a lifetime of lost wages.

In cases where a truck or bus driver was the cause of the collision, getting full compensation for motorcycle accidents can be challenging because the driver may not be the best or only person to hold accountable. The victim could pursue a claim against those who employ the driver because of agency rules. Under agency rules, a trucking company or bus company is liable for the on-duty actions of its workers.

A motorcycle accident case involving a bus can be complicated further if the bus is a public transportation bus run by the government. Qualified immunity rules limit lawsuits against government workers and agencies, and could make it more difficult for a motorcyclist or his family to pursue a successful claim.

Knowing the rules for pursuing cases against the government would be essential to victims seeking to get the money they deserve after motorcycle accidents involving government vehicles.