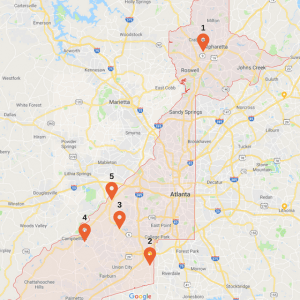 If you live in or around Fulton County or even drive through the county during your commute, then you know traffic can be intense.

Fulton County has the largest population out of any other county in Georgia with an estimated 1.1 million residents. With that large of a population, there is also more traffic and, unfortunately, more car wrecks. All the major roadways in Atlanta pass through Fulton County.

So, where are the most dangerous intersections located? Let's list the top five:

So, why are these intersections seeing such a high volume of wrecks in Fulton? Well, the Atlanta Regional Commission, which studies traffic patterns, suggested that individuals driving in the suburbs are generally moving faster than in the congested streets of downtown Atlanta and therefore are more prone to collisions.

In 2014, Fulton County saw 55,833 crashes on its roadways. And in 2015, the National Highway Traffic Safety Administration reported that there were 104 deaths from car accidents in Fulton County. The third leading cause of those accidents: speeding.

Now, high speeds make a car accident far more likely because it takes a longer distance to stop or to slow down. They also make collisions deadlier because crash energy increases as your speed goes up. Speeding kills and we have to combat these startling statistics with safety on our roadways.

If you have questions about a potential claim then please give us a call. You have absolutely nothing to lose by calling but think of all you could lose if you don't.

Just pick up the phone right now and give us a call at 1-800-WIN-WIN1. The consultation is free, it's completely confidential, and there are no obligations whatsoever.

You can also visit the main page of our website GaryMartinHays.com. It's loaded with information about personal injury claims so you can learn more about your rights and how our law firm can help.