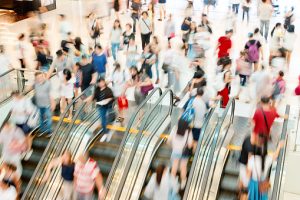 Unruly crowds, hectic parking lots and slippery conditions can make holiday shopping a dangerous task. Victims of parking lot car accidents, slip-and-fall injuries, and even violence on retail property may be entitled to be compensated for their injuries. After any type of holiday shopping accident, consult with an Atlanta personal injury attorney to learn about your rights to compensation.

Many shopping malls and retail locations are a mix of shops, restaurants, public recreation areas and parking facilities. Injuries can occur in any or all of these locations. Such was the case for Atlanta diners eating at a restaurant located in a strip mall in Southwest Atlanta. The Atlanta Journal-Constitution reports that the roof of the Blu Cantina restaurant collapsed at around 8:40 p.m., during the evening's dinner rush. Six patrons were injured and four were transported to local hospitals. Officials believe the collapse was caused by heavy rain on a flat roof design.

Shopping injuries can also occur as the result of violence. Two victims were shot outside a Discount Food Mart in Atlanta. According to the Atlanta Journal-Constitution, a witness reported seeing three or four people arguing outside the store just before the shooting occurred. One victim, a father of five children, was found in a car in the parking lot with multiple gunshot wounds. He was taken to Grady Memorial Hospital, where he died from his injuries. The other victim attempted to drive to the same hospital before crashing his car. Emergency responders were able to transport the second victim to the hospital with non-life-threatening injuries.

Sometimes, gunshots are fired accidentally. This is what occurred when a gun was found by a 10-year-old boy in a dressing room at the Lenox Square Adidas store. The Atlanta Journal-Constitution reports that the boy gave the gun to his mother, who pulled the trigger to "see if the gun was real." A single shot fired from the (very real) gun, causing damage to the store wall. Luckily, no one was injured in the incident. Had there been an injury, liability might have come down to the question of how long the firearm existed in that location and whether property owners had constructive knowledge (should have found in the course of exercising reasonable care).

Who is responsible for Atlanta shopping injuries?

When one party's negligence causes injury to another, the negligent party is legally obligated to compensate the victim for his or her financial losses. These losses can include medical bills, pain and suffering, lost wages, rehabilitation, and other costs which were incurred as a direct result of the defendant's negligence.

Determining who was negligent can be a complicated task. In the case of violence, for example, a store or security company may be found negligent for using inadequate security methods. For a slip and fall injury, the store owner may be liable for failing to maintain the premises in a safe, non-slippery condition. After a parking lot car accident, insurance companies for all involved drivers will conduct investigations to determine who was legally at fault for causing the accident. The owner of the parking lot may be responsible too if there is evidence some condition on site contributed to the crash.

An Atlanta personal injury attorney can help victims of many different types of holiday shopping accidents. Whether you were injured in a slip and fall accident, parking lot car accident, or other shopping-related injury, seek the legal advice that will help you assert your rights.