Home » Blog » Should I Hire an Atlanta Bicycle Accident Lawyer?

Should I Hire an Atlanta Bicycle Accident Lawyer? 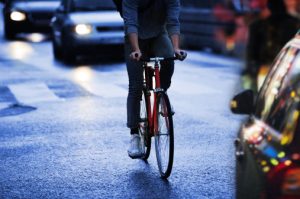 Bicyclists are among the most vulnerable road users in Atlanta, lacking the same kind of structural and technological protections as occupants of motor vehicles.

Their smaller profile makes them tougher to see and places them at higher risk of serious injury and death than those in cars, according to the Centers for Disease Control and Prevention (CDC).

How safe are bicyclists in Atlanta?

As discussed in one of our videos, the Georgia Department of Transportation reports that people on bicycles are 10 times more likely to be involved in a crash than people in motor vehicles. Bicycle accidents resulting in serious injury or death occur mostly on urban roads. Nationally, bike crashes result in $10 billion annually in medical costs and loss of productivity.

Recently over a six-year span, officials in Georgia reported more than 7,000 bicycle accidents and 118 related fatalities.

With bicycling an increasingly popular activity, the City of Atlanta has constructed just over 30 miles of dedicated bicycle lanes. Another 15.2 miles are in the works, with completion expected in the coming months. Unfortunately, even this won't protect cyclists from every careless motorist.

Bicyclists are especially vulnerable at intersections, considering that is where more than one-third of all deadly bike crashes occur, according to the Insurance Institute for Highway Safety.

Why should I hire an attorney?

If you are hurt in a bicycle accident in Atlanta, you may have wondered whether you need to contact an attorney. The simple answer is: Yes.

It's likely your injuries required medical attention beyond first aid and may have even left you permanently injured or scarred.

If you were injured in a bicycle crash, it's important that you take your claim seriously from the start. If you're able to, take photos of the crash scene and speak to witnesses. An experienced personal injury lawyer can use this as crucial evidence when building a case against the negligent driver and his or her insurance company.

You should then seek immediate medical attention, even if your injuries seem minor. The longer you wait, the more difficult it can be to recover from your injuries and receive compensation for your medical expenses, lost wages, and suffering.

An attorney at The Law Offices of Gary Martin Hays & Associates, P.C. can discuss your options. Contact us today for a free consultation.