Atlanta traffic brings many eighteen-wheelers, tractor trailers, flatbed trucks, tanker trucks, and other types of big rigs to the roads of Georgia. Unfortunately, Thousands of Atlantans are injured every year in truck accidents. The physics of a collision with a large, heavy vehicle allow for victims of truck accidents to be seriously injured in myriad ways. 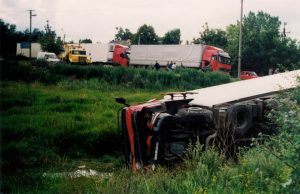 The Many Mechanisms of Injury in a Truck Accident

Truck accident victims face threats from cargo, flying debris, and the mere weight of the other vehicle when they are involved in a collision with a large truck. Even when the responsible driver is not in the large truck, the truck itself can cause extensive damage. This is what happened in an accident on Interstate 85. According to the Newnan Times-Herald, a Ford F-350 towing a livestock trailer struck a tractor trailer when it was attempting to change lanes. Despite the extensive property damage to the vehicles, the occupants sustained only minor injuries. The horses in the livestock trailer were also unharmed.

In a far more tragic outcome, four teenage students of Langston Hughes High School in Fairburn were killed when their Lincoln Navigator ran a red light and collided with a tractor trailer. The driver was ejected. WSB-TV 2 Atlanta reported that only one occupant of the Navigator, a female teenager, survived the crash. This, too, is a tragic example of the powerful momentum behind a heavy truck. Regardless of who caused the accident, the truck has the power to seriously injure anyone involved in the accident.

The cargo within large trucks can also cause serious injuries. The Atlanta-Journal Constitution reported on a crash between an SUV and a tractor-trailer, which resulted in hazardous material being spread across the Interstate 285. Both drivers faced charges: the large truck was legally prohibited from travelling on the Downtown Connector route, but the SUV driver had an expired driver's license. Ultimately, hazardous material was released into the environment, and the Downtown Connector was closed for hours. The public suffered as a result.

The lesson to be learned from all of these accidents is that, regardless of who is at fault for causing a truck accident, anyone involved in the accident can be seriously, and even fatally, injured by the momentum of a large, heavy truck. Even the unsuspecting public can be injured by the hazardous materials being transported in such a truck. It falls to each driver on the roads of Atlanta to exercise personal responsibility, and drive with particular caution around large trucks.

If you are injured in a trucking accident in Atlanta, our injury attorneys can help you in recovering damages for:

The Law Offices of Gary Martin Hays and Associates have been protecting residents of the greater Atlanta area since 1993. Our experienced truck accident attorneys aggressively defend the rights of injury victims, and ensure that truck drivers and trucking companies are held responsible for their negligence.