Home » Blog » Crashes, Injuries and Fatalities During the 2017 Holidays

Crashes, Injuries and Fatalities During the 2017 Holidays

The Georgia Department of Public Safety released the final holiday travel count for the 2017 Christmas and New Year's season as reported by Georgia State Patrol and local law enforcement agencies.

We compared the 2017 holiday travel season with previous years and discovered a key finding: crashes and injuries overall were down compared to 2016 and 2015, but fatalities have risen over the same period. 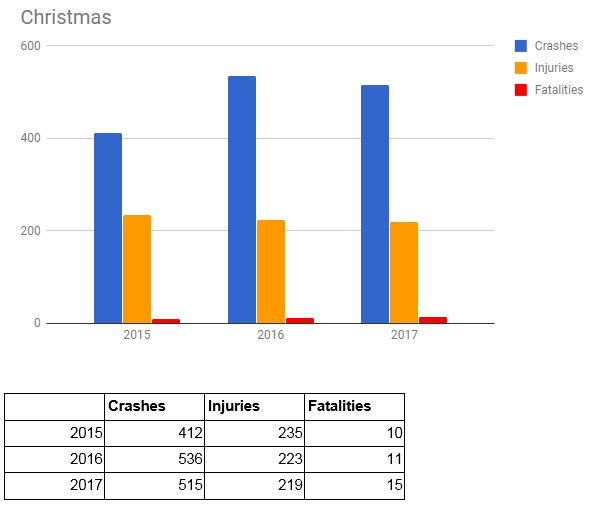 Car accidents increased significantly in 2016 but dipped slightly this past Christmas. Meanwhile, the number of injuries has slowly but steadily declined. Despite this, the number of deaths caused by crashes has continued to rise. 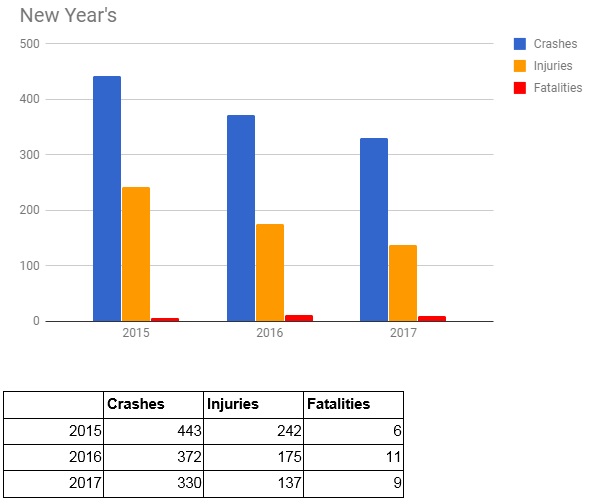 The New Year's holiday travel period is often shorter, so it's less likely to feature higher crash and injury statistics compared to the Christmas travel season. Total crashes and injuries during the New Year's season have been steadily declining, while fatalities hover around an 8.67 average. 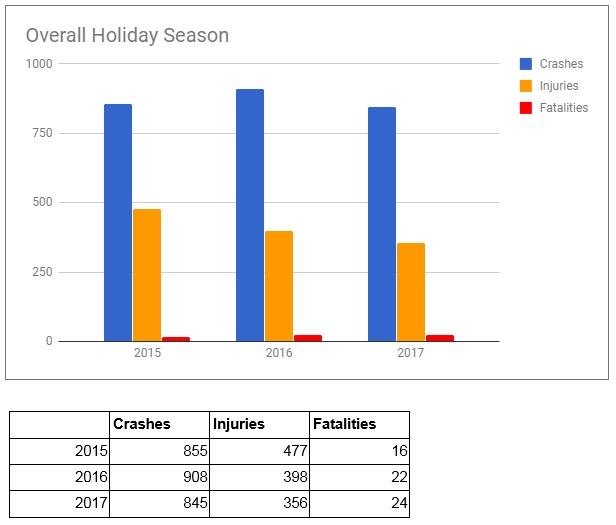 Taken altogether, the data appears somewhat encouraging. Crashes decreased in 2017 and injuries caused by car wrecks are continuing to decline. But the increase in fatalities remains concerning.

The cause of the fatalities was not listed, although likely suspects include speeding, driving while under the influence of drugs and/or alcohol, lack of seatbelts, and distracted driving.

The Georgia DPS also released the number of people arrested for DUIs, as well as the total number of traffic citations and warnings issued to motorists (data unavailable to compare to previous years).

Some good news: Albany, Georgia saw zero DUI arrests and no deadly crashes over the New Year's holiday weekend. Georgia state patrol troopers said they were impressed with how few drunk drivers were on the road during that time.

Were You Involved in a Holiday Travel Accident?

The holidays are supposed to be a time of hope and celebration but life sometimes doesn't go according to plan. Call the Law Offices of Gary Martin Hays & Associates at 770-934-8000 if you or someone you know has been injured through no fault of their own and we'll help them receive the compensation they need and deserve.