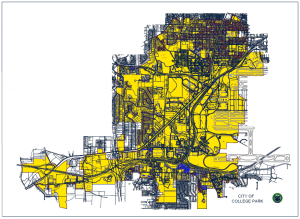 While Metro Atlanta has continued to see a decline in criminal activity over the past several years, College Park has seen an increase in violent crime and remains among the top cities in the U.S. for total crimes committed compared to its population size.

So why is College Park so dangerous (or at least, perceived that way)?

One of the reasons might be the city's proximity to Hartsfield-Jackson International Airport and the criminal elements which flow to and from the transportation hub.

The recession also crippled College Park's housing market, causing the area to experience a high rate of foreclosures. This, in turn, created a large homeless population, which added to the city's souring reputation.

Of course, for many who live and work in College Park, the area isn't as bad as statistics and headlines might lead some to believe.

It is always important to take extra safety precautions when traveling and to report any dangerous or harmful activities to the police as soon as possible.

It's important to note that if an attack occurs within a business, such as an apartment complex or a commercial parking lot, that business can potentially be held liable.

Under Georgia law, these businesses have a duty to exercise ordinary care to prevent foreseeable third-party criminal acts.

If you live in or around College Park, Attorney Gary Martin Hays encourages you to be vigilant. Don't put yourself in a situation where you are an easy target.