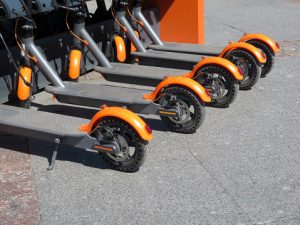 Atlanta is one of several major cities across the United States struggling to find ways to reduce emissions and ease traffic congestion. Dockless electric scooters and e-bikes offer the convenience that many residents and visitors are looking for. They do, however, come with serious risks that city officials are currently grappling with.

Electric scooters first made their way to Atlanta streets illegally in May 2018. In January 2019, the city began allowing the use of electric scooters and issued permits to eight companies. The city also has a cap of 12,700 scooters deployed on its streets. Riders may use only around 5,500 scooters per day.

This year, four electric scooter riders were struck dead by drivers in Atlanta during the nighttime hours. As a result, city officials have banned the use of electric scooters and electric bikes within the city limits from 9 p.m. to 4 a.m., according to Streetsblog.

Companies operating in the city - including Bird, Jump, Lime, Lyft, Bolt, and Wheels - must disable all micro-mobility devices during that time. The companies have all been compliant.

Riders who attempt to rent a micro-mobility device after 9 p.m. will receive a text informing them that service won't be available until 4 a.m. the next morning.

"It is evident that immediate action is necessary to keep Atlanta's residents and visitors safe," Mayor Keisha Lance Bottoms said in a statement.

According to city transportation officials, the ban will only be temporary, as officials work with micro-mobility companies to revise the application process for permits. Companies with existing permits will need to renew them next February.

Streetsblog cites these incidents that prompted officials to impose the overnight scooter ban:

Electric scooters and e-bikes aren't going anywhere. If anything, their popularity will only continue to grow as more regulations and safety measures are implemented.

In order to stay safe, it's important that riders obey all traffic signs and signals, wear protective gear and helmets, and ride on the side of the road in the same direction traffic is moving.

In the event you or a loved one is injured in a crash with a negligent driver, we urge you to seek immediate medical attention, even if you feel fine. You should then speak to an experienced Atlanta personal injury lawyer who can help you pursue a strong legal claim against the driver and his or her insurance company.

The Law Offices of Gary Martin Hays & Associates, P.C. can deliver results. Contact us today to find out how we can help you.