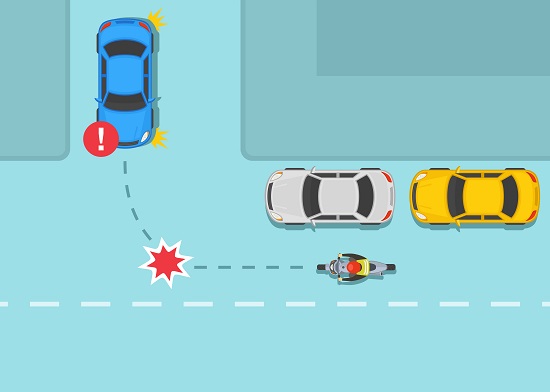 Motorcyclists are at the greatest risk of injury and death when making left turns or when a car is turning left at an intersection.

According to the U.S. Department of Transportation, 53% of intersection crashes involve left turns (only 6% involve right turns!). In other words, crossing an intersection to make a left turn is far more dangerous than turning right or going straight across.

Adding to that, 42% of fatal motorcycle accidents involving another vehicle happen when a vehicle turns left while the motorcyclist is going straight, passing, or overtaking the vehicle.

A driver involved in a left-turn motorcycle accident may try to say they didn’t see the motorcyclist, or the insurance company may blame the rider for hitting the vehicle. Don’t accept fault or an immediate settlement offer after a crash; talk to a motorcycle accident lawyer for professional advice about your case.

Multiple injuries are possible in a motorcycle collision, but riders are more likely to experience specific injuries to the legs, chest, and skin after a left-turn accident.

A rider’s legs are highly vulnerable in a crash, often bearing the full brunt of the initial impact as a vehicle barrels into them from the side. In fact, broken bones and crush injuries to the leg and feet are the most common injury types sustained by motorcyclists.

Nearly half of motorcyclists treated at trauma centers suffered an injury to their lower extremities. More than a quarter of leg injuries caused by a motorcycle accident affects the lower leg. The second and third-most common leg injuries affected the pelvis and knee.

Depending on the severity of the crash, leg injuries may leave a person with long-term complications and disabilities.

Since they lack the frame of a motor vehicle for protection, motorcycle riders are highly susceptible to internal injuries. Getting hit by a high-fronted vehicle can cause damage to the ribs and internal organs. Symptoms of a rib fracture or internal injury may include:

Internal injuries are often life-threatening. Seek treatment immediately if you suspect you suffered a broken rib or internal organ damage.

A rider thrown to the pavement during a crash or dragged across the ground can suffer terrible scrapes and abrasions, known as road rash, especially if they weren’t wearing protective motorcycle gear. Not only is the skin torn off, irritating and potentially infectious debris can become embedded into the exposed tissues.

Road rash is generally non-life threatening. But such injuries are painful and can leave long-lasting scars. Severe road rash sometimes leaves behind damaged nerves and muscles if the wound is deep enough.

It’s common for drivers to say they didn’t see a motorcyclist until it was too late.

Sometimes that's the truth; motorcyclists are smaller and can be hidden by blind spots. Nearly half of a driver’s view is obscured by blind spots. This can be worsened by line-of-sight blind spots, the crest of a hill, curved roadways, or other obstructions.

Other times, it actually means the driver either wasn’t paying attention to their surroundings, they were distracted, or they tried to cut across or turn suddenly without making sure the roadway was clear.

Unintentional or not, if the driver caused the left-turn accident and is found at fault, the motorcycle rider can turn to the driver’s insurance company for compensation.

The process for filing an accident report and claiming personal injury compensation, however, can be stressful and confusing. Talk to a personal injury lawyer who specializes in motorcycle accidents before giving a statement or signing any documents.

Get a Georgia Motorcycle Accident Lawyer to Fight for Your Rights

A left-turn motorcycle crash can mean terrible injuries and large hospital bills. The injured rider may require surgery, bed rest, and long-term physical therapy before returning to all of the activities they once enjoyed, including riding their motorcycle.

If you or a loved one were injured in a left-turn collision, the Atlanta motorcycle accident lawyers at Gary Martin Hays & Associates are here to help. After more than 30 years in the legal business, we know the insurance companies' tactics and have worked hard to provide riders and their families with the high-quality representation they deserve.