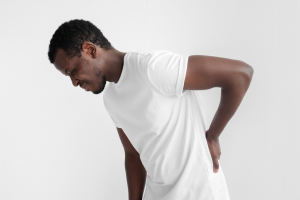 Car accidents happen fast. One moment, you're slowing down or crossing an intersection and the next moment you're slamming into an airbag or window.

But other than feeling shocked or disoriented, you feel fine. You think: I don't need to go to the doctor, they won't find anything wrong with me. I need to save that money for car repairs.

I want to tell you about a friend of mine that recently experienced a car crash. To protect her privacy, we'll call her Chloe.

She was driving on I-75 southbound near Marietta. Traffic was slow and the cars ahead of her began to stop so she slowed down as well. But the car behind her did not.

Her beloved old car was practically totaled. Fortunately, Chloe felt fine and counted her blessings. She went home and tried to figure out whether her car was worth fixing.

Forty-eight hours later Chloe was in terrible pain. Agony radiated from her back and her limbs twitched and spasmed constantly. She couldn't stand or walk without being in pain and hoped her injury would get better on its own since she didn't have health insurance.

Unfortunately, it didn't and that's when she knew she needed a personal injury lawyer to help her.

What Happens to the Body During a Car Accident

So, why did Chloe feel fine after her accident only for her injuries to show up two days later?

Adrenaline. It's a natural hormone produced by the body during traumatic experiences.

Adrenaline can mask a person's pain and heighten their awareness. This is useful for getting out of danger or fighting off an attacker.

Car accidents are incredibly stressful events and the hormone instantly floods the body in order to protect itself.

You may feel time slow down (slow motion perception) or have faster reactions. Other effects from adrenaline you may experience during a car accident include:

The injuries and pain the adrenaline was helping suppress, however, become more apparent as its effects wear off.

After-effects of adrenaline include shaking (due to a drop in blood sugar levels), fainting (caused by a sudden drop in blood pressure), and the release of intense emotion, usually in the form of crying.

How Endorphins Act as Pain Relievers

There's another hormone that works to suppress pain: endorphins. These neurotransmitters help transmit signals between the neurons in the nervous system. They bind to neuron receptors that collect and transmit morphine, dopamine, and other naturally produced opiates.

Endorphins are typically triggered when something pleasurable or satisfying occurs, such as when you exercise, ride a roller coaster or eat spicy food. They are also released when a person is stressed or in pain.

Endorphins are used to soothe us when we are sad or angry, and calm us when we are afraid. This helps us survive while we are under duress and a car crash certainly counts as one of these times.

Many crash victims report feeling pain 24-48 hours after the event. Similar experiences are shared by people who exercise and feel sore later or athletes who injure themselves in a game but don't realize it until after the game is over.

This combination of adrenaline and endorphins means some people who are hurt don't realize it until many hours later.

In Chloe's case, an MRI revealed that the tissue around her spine had been inflamed, causing the pain and uncontrollable twitching. With medication and rest, she's slowly starting to recover.

Like Chloe, you or someone you know walked away from a wreck with no visible injuries. However, no matter how you feel, you should always consider going to the doctor afterward. You may have injuries that a medical practitioner can test for and diagnose.

It's also imperative to document your injuries and medical treatment. If you wait too long to get medical care after a car accident, it could jeopardize your claim. The insurance company will argue you aren't really that hurt because you took so long to go to the doctor or that your injuries are unrelated to the crash.

If you're seriously hurt and are struggling to cover your medical bills, call Gary Martin Hays for help. We've helped thousands of crash victims navigate the complex legal hurdles insurance companies put in the way and can get you the treatment and money you need to recover.

Treating Bulging Discs After An Accident