Sideswipe collisions can result in both minor scrapes and dents and catastrophic, even deadly outcomes. Side-to-side collisions between two or more vehicles can lead to horrific crashes that leave their victims seriously or fatally injured. 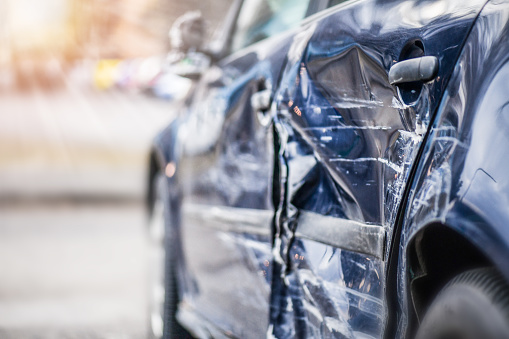 According to Popular Mechanics, more than 840,000 sideswipe accidents happen each year in the U.S. due to blind spots. While new vehicle technology such as lane departure warnings and blindspot detection systems have helped reduce sideswipe crashes, they still occur on a regular basis.

Who’s At Fault in a Sideswipe Accident?

With most collision types, it’s fairly simple to determine which driver is at fault. In a rear-end accident, the rear driver is usually the person held responsible for the crash. If a car ran a red light and hit another at an angle, witnesses or a camera may be available to confirm their negligent act.

A sideswipe accident is a collision between at least two vehicles traveling in the same direction where the right side of one vehicle impacts the left side of another. These collisions can be extremely dangerous at high speeds on highways or interstates. Surprised drivers may lose control or overcompensate while trying to maintain control, leading to chain event accidents.

In most cases, who is at fault for a sideswipe accident is the driver that failed to maintain their lane. However, in certain circumstances, the driver who is hit may be held responsible instead. This can happen if the driver sped up or blocked someone trying to pass or merge into a lane.

When Multiple Vehicles Are Involved

Sometimes a sideswipe car accident leads to a multi-vehicle crash. One or both drivers involved in the initial impact of the sideswipe may react by swerving, slamming on the brakes, or spinning out, inadvertently hitting other cars in the process.

A sideswipe can also happen when a car dodges another car that comes to a sudden stop — the rear car swerves over and hits the side of another vehicle. In this type of accident, the first two vehicles could be found at fault.

Georgia is a comparative negligence state, which means that more than one person can be found at fault or that a percentage of fault can be shared. Even if you are found partially at fault, it may still be possible to obtain a settlement.

A sideswipe can happen when one car merges or changes lanes, crushing or scraping against the side of another vehicle traveling in the same direction. Cars can also sideswipe motionless objects such as parked vehicles or curbside structures.

This type of car accident may occur when:

What to Do After a Sideswipe Accident

After any type of car accident, you should call 911 and wait for assistance. Ask for medical help if you or someone else needs it. If it is safe to do so, document the scene of the wreck by taking pictures of the damage to your car, tire marks, and injuries. Gather the names and contact information for any witnesses.

A personal injury lawyer can use these pieces of evidence to determine fault in the accident. Insurance companies often deny their insured driver was at fault for a crash, even if that person admitted responsibility at the scene. Evidence is crucial for a car accident case in the event the insurance company denies your claim or offers an unfair settlement amount.

If you were hurt in a sideswipe accident, you need an experienced Atlanta attorney who can prove you weren’t at fault. At Gary Martin Hays & Associates, we have the knowledge and compassion to get you the compensation you deserve.

We hold the at-fault driver and their insurance company accountable, whether they are a person, a driver for a company, or a government entity. We evaluate the harm done in a sideswipe collision accident by investigating the evidence at the scene and compiling medical records. This allows us to obtain a full and thorough understanding of how the accident affected the victim’s life.

Contact us for help with your sideswipe accident case today.