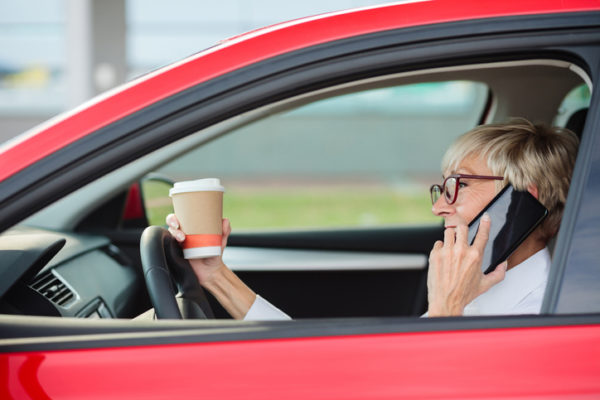 According to Bloomberg, motorists still drive distracted despite laws prohibiting it. In most cases, law enforcement isn’t available to stop drivers from glancing away from the road.

In the Bloomberg article, a retired Atlanta executive recalls an incident involving distracted driving that still leaves him haunted to this day. The man says that he “broke his personal no-phones-at-the-wheel policy,” and unknowingly passed a stopped school bus and nearly struck two grade-school students trying to cross the street.

“I slammed on the brakes, looked back in the rear-view mirror,” he told Bloomberg.

Even for drivers who aren’t typically distracted behind the wheel, it only takes one time to result in a devastating crash. While we never truly know how many distracted drivers are within our proximity, a new tech startup has found just how many drivers are distracted by cellphones.

A tech startup determines just how many drivers are distracted

In exchange for insurance incentives and other rewards, TrueMotion Inc., a smartphone driving platform, asked roughly 30,000 motorists to have their phone usage tracked while driving.

According to the data collected by TrueMotion Inc., here are the most accurate figures of how many distracted drivers are on the road for every 100 drivers:

TrueMotion also tracked the habits of drivers in New York and Los Angeles and found that drivers tend to be more distracted during the summer than any other time of year. During holidays, drivers text and drive 30 percent more often than they do most other days of the year. On weekends, texting and driving tend to go up about 9.1 percent.

What distracted driving data was tracked?

TrueMotion was founded in 2013. The company uses several sensors built into smartphones to track how phones are moved or handled by drivers. The sensors allow them to determine whether a driver is texting, making a phone call, quickly checking a notification, or using a cellphone that is mounted.

The impact of hands-free laws

In addition, drivers are prohibited from:

Penalties for violating the hands-free law include:

Get a Georgia car accident lawyer

In Georgia, a study involving between 20,000-25,000 drivers using TrueMotion found that the rate of distracted driving fell by 20 percent since the passage of the hands-free law in 2018.

Not all crashes caused by distracted driving involve cellphones, however. Drivers can be distracted just by talking to passengers, eating, drinking, multitasking, or engaging in any other activity that takes their attention away from the road. Since many incidents involving distracted driving don't leave behind any physical evidence, the number of distracted drivers on the road at any given time could be much greater.

Should you or a loved one be injured in a crash with an inattentive driver, the Atlanta car accident attorneys at the Law Offices of Gary Martin Hays & Associates, P.C. can help you explore your legal options. Don't hesitate to contact us online or call us at 1-800-898-HAYS.