Is the Georgia Hands-Free Law Working? 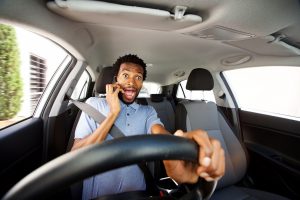 Distracted driving can take many forms: texting, messing with the radio, eating and drinking, or talking with a passenger. Anything that takes your attention from the road is dangerous.

According to the NHTSA, if you're holding and talking on your phone, you are four times as likely to be involved in a crash; eight times if you're messaging someone or scrolling through a social media feed.

Teens and young adults are the most at-risk of being involved in a fatal wreck because of this behavior.

Georgia's hands-free law was passed back on July 1, 2008, with the aim of reducing one of the biggest sources of distracted driving: phones.

Distracted driving crashes in Georgia have been on the rise over the past decade by more than 400 percent. In 2016, there were over 25,000 crashes in which contributing factors "inattentive," "cell phone" or "distracted" was listed as a factor compared to the only 5,700 distracted driving accidents in 2006.

Distracted driving convictions have doubled within the past year, with 19,000 convicted statewide. Of the most populous counties Gwinnett, Liberty, Walker, and Hall had the most convictions.

Gwinnett County alone has issued more than 2,000 citations. Most were issued by the Lawrenceville Police Department, with 1,700 distracted driving tickets.

The largest counties with the fewest convictions include Barrow, DeKalb, Forsyth, Bibb, Richmond, Cobb, and Fulton in that order.

Most Georgia drivers are aware of the hands-free law but still see other drivers operating their phones behind the wheel.

A survey by AAA of 409 residents found that 77 percent of respondents were aware of the law yet 60 percent saw others using their phones while driving.

An AJC Poll found that 45 percent of respondents reported obeying the law all the time, while 40 said they obeyed it most of the time.

How to Drive "Hands-Free"

Under the Hands-Free Georgia Law, you cannot hold a phone in your hands or use any part of your body to support the device, like the shoulder or lap. You also cannot use headphones, although you are allowed to talk on the phone using a speaker, earpiece, or hands-free Bluetooth connection.

If you have to make a call or text, pull over to a safe place and put the vehicle in park or ask a passenger to make the call instead. Use a phone holder and voice commands or Bluetooth devices if you want to make calls while driving.

If the temptation is too much, put the phone somewhere out of sight or out of reach. There are also apps you can use to silence your phone to prevent notifications from distracting you.

As time goes on it will become clearer what the full effect of the law is and how many lives have been saved.

So, put up your phone, focus on the road, and just drive!

Were You Injured By a Distracted Driver?