Failure to Yield Accidents: How to Determine Who’s At-Fault 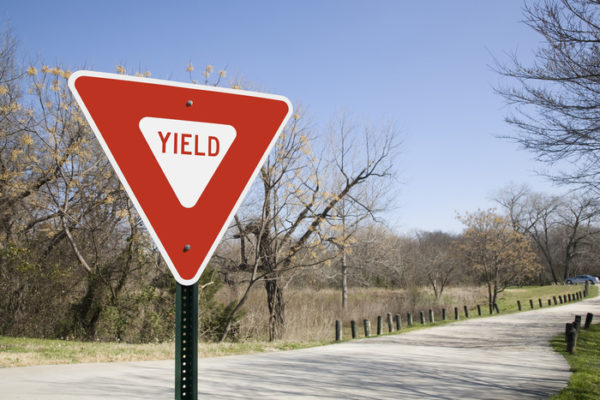 Failure to yield is ranked as one of the top reasons for auto accidents each year. According to the National Highway Traffic Safety Administration, failure to yield is the fourth-leading cause of fatal crashes for drivers in the U.S.

A failure to yield accident happens when a driver fails to give a pedestrian or vehicle their rightful space and time to proceed in a particular situation, commonly referred to as “right of way.”

These types of collisions occur because drivers may be negligent, distracted, or impatient. They ignore laws of traffic by running red or yellow flashing lights without stopping or slowing down, turning left without looking, and aggressively merging onto the highway or roadway without regard for oncoming vehicles.

The Georgia Code is pretty clear and succinct regarding when drivers should yield:

“The driver of a vehicle about to enter or cross a roadway from any place other than another roadway shall yield the right of way to all vehicles approaching on the roadway to be entered or crossed.” - O.C.G.A § 40-6-73

All drivers are expected to obey the right of way laws. Right of way situations are often encountered during the following instances:

“The driver of a vehicle intending to turn to the left within an intersection or into an alley, private road, or driveway shall yield the right of way to any vehicle approaching from the opposite direction which is within the intersection or so close thereto as to constitute an immediate hazard.” - O.C.G.A § 40-6-71

Left-hand turns can be dangerous, especially when drivers need to cross two or more lanes or a hill or curve is obscuring their view of oncoming traffic. Drivers should use caution when turning left and signal their intent ahead of time.

Never try to race or beat oncoming traffic. Failure to yield while turning left can result in a crash and a citation.

Stopping at a stop sign is one of the most basic driving scenarios. Drivers should come to a complete stop, wait for other drivers to go through or turn if they arrived first, and look both ways to make sure the road is clear.

Speeding or drunk drivers sometimes ignore or don’t notice stop signs, so it’s always a good idea to double-check. Failure-to-yield and failure-to-obey crashes at stop signs often peak in the late afternoon between 3 p.m. and 6 p.m.

At a four-way intersection with stop signs, all drivers must yield to pedestrians. Otherwise, drivers may proceed in a “first to arrive, first to proceed order.” If two vehicles arrive at the same time, yield to the driver on your right.

Sometimes drivers hesitate or there is confusion on whose turn it is to proceed through the intersection. If another driver goes ahead of you even though it’s your turn and you have the right of way, let them proceed. It’s better to be inconvenienced than involved in a crash.

“The driver of a vehicle approaching a yield sign shall... slow down to a speed reasonable for the existing conditions and, if required for safety to stop, shall stop at a clearly marked stop line or, if there is no stop line, before entering the crosswalk on the near side of the intersection or, if there is no crosswalk, at the point nearest the intersecting roadway where the driver has a view of approaching traffic on the intersecting roadway before entering it.” - O.C.G.A § 40-6-72 (c)

When at a yield sign, a driver should slow down and look for traffic. They must yield to any potential oncoming traffic. If a driver is involved in a collision after driving past a yield sign without stopping, they will most likely be cited for failure to yield.

Roundabouts are designed to keep the flow of traffic moving and reduce collision rates. When a driver approaches a roundabout, they should slow down. If a vehicle enters or is in the roundabout, that driver has the right of way. An approaching driver should come to a complete stop and wait for the driver to exit the roundabout or pass by before entering.

Driving Tip: Do not stop inside a roundabout and wave other drivers into the circle. Keep moving.

At intersections with traffic lights, wait until it is clear of traffic or oncoming traffic before entering. Just because you have the green light does not mean it is automatically safe to go. If you are first at the intersection, look both ways when a light turns green before driving. The moment after a light change is often when speeding or distracted drivers run a red light and crash into another car.

Unless a posted sign says otherwise, it is permissible to turn right on red at an intersection. You should come to a complete stop first to make sure it is safe to turn and yield to all traffic and pedestrians.

Drivers 65 years and older are more likely to be involved in fatal failure-to-yield crashes at both traffic lights and stop signs. They happened most often when they were turning left and were struck by another vehicle on the passenger side. Failure to yield on a right or left turn at an intersection may also be caused by a driver who is distracted, inattentive, tired, or drunk.

Driving Tip: If you arrive and another driver at an intersection where there are no stop signs, yield signs, or other traffic lights at the same time, the driver on the left must yield to the driver on the right.

Merging Onto the Interstate or Highway

If emergency vehicles are using their emergency lights and sirens, move your vehicle out of the way. Slow down and move over to the shoulder of the road or as far to the right of the roadway or lane as you can, and stop. Always use caution to ensure that you do not endanger other drivers, bicyclists, or pedestrians. Never block an intersection in such a way that it prevents an emergency vehicle from making a necessary turn.

Failing to yield the right of way can have significant consequences. If a police officer determines a person is driving recklessly or their failure to yield resulted in an accident, they will write a ticket and add a three-point penalty onto their driver’s license. Fines can range from $140 to $225 for a standard vehicle. Failing to yield for an emergency vehicle can cost $550.

Hurt in a Right of Way Georgia Accident?

Obeying the right of way laws and rules in Georgia is fairly straightforward, especially when combined with common courtesy. Car accidents caused by a failure to yield are often the result of inattentive, impatient, or negligent drivers.

If you’ve been injured in a failure to yield crash, whether you were in a car at an intersection, a bicyclist on the sidewalk, or a pedestrian in a crosswalk, our Atlanta personal injury lawyers can help. Contact our team today for a free consultation.