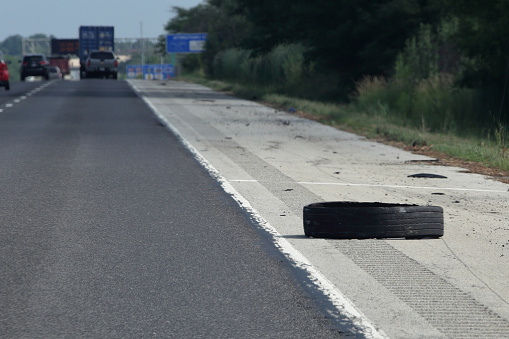 Driving on I-285 — one of the busiest highways in the United States — is often challenging. When you throw giant flying tires from 18-wheelers into the mix, the situation can get very dangerous, very quickly.

Recently, a former CBS 46 reporter found himself in this exact situation during a wild accident on I-285 South near the Hollowell exit.

On his way to a Mother’s Day event, Dontaye Carter was shocked when a tire from a big rig shot out from under the vehicle in front of him and smashed into his windshield.

Glass went flying everywhere as the tractor-trailer's rubber tire smashed into the car. While the glass cracked and shattered, the tire did not break through it. Carter was alone in his BMW and sustained only minor injuries as a result of the rogue truck tire — but it could have been a lot worse.

Accidents caused by cargo, equipment, and parts falling into the road are a lot more common than you might think.

Here's what drivers in Atlanta should know to stay safe.

Every year, road debris is a significant source of motor vehicle accidents in Georgia and across the United States. Over a three-year period, AAA found more than 200,000 police-reported crashes nationwide where "stuff in the road" was a factor.

Of these crashes, almost 40,000 resulted in injuries and 500 people died. Many of the fatalities occurred when the driver swerved to avoid an object in the road.

Car accidents involving road debris happen most frequently on interstates, such as I-285, with poor vehicle maintenance and unsecured cargo loads the primary causes.

Some of the most common pieces of road debris drivers encounter include loose tires, wheels, couches, tables, chairs, washers, dryers, and tow trailers that have separated from truck cabs.

How to avoid a crash involving road debris

There are steps drivers can take to avoid being involved in an accident caused by road debris.

Tire blowouts are often caused by stress on badly worn or underinflated tires, and rusty exhaust systems can break loose and become unattached from a vehicle.

Whenever you’re moving or towing an item, go through these 5 steps:

To cut down on your chances of being in a debris-related accident, be on the lookout for danger. Don’t tailgate other drivers and make sure to take a long view of the road ahead. If you see or are about to make contact with an object in the road, reduce your speed as much as possible prior to making contact. Drivers often react to road debris by swerving to miss it, but a sudden maneuver like that can lead to a bad accident with another motorist, pedestrian, or object.

Get the accident lawyer Atlanta trusts when you've been injured

The Law Offices of Gary Martin Hays & Associates, P.C., has been representing crash victims in Atlanta — a national trucking and transportation hub — for nearly 30 years. Since 1993, we've helped Georgia families recover over $1 billion.

If you were injured in a crash because someone else didn't perform appropriate maintenance on their vehicle or properly secure their cargo, you deserve compensation for your accident-related expenses.

The problem is you can't count on the insurance company for the at-fault driver to just give you a fair financial settlement. The insurance industry makes billions of dollars in profits every year by short-changing and rejecting valid claims. As such, they have a financial interest in paying you the least amount of money possible, if anything at all.

Dealing with trucking companies isn't much easier. They have teams of attorneys ready to protect their best interests and will not hesitate to deny responsibility for a serious crash.

In either case, one of the best ways to level the playing field is by hiring an attorney.

Find out how an experienced personal injury lawyer can help you and contact us right away to schedule a free consultation. We have offices in Duluth, Atlanta, Lithonia, College Park, Gainesville, and Marietta.