Atlanta Ranked as One of the Most Dangerous Places to Drive 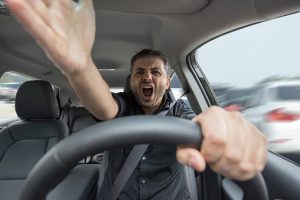 Gas Buddy shows fuel prices in real-time on its website and app. Using data from its app and the U.S. Census Bureau, they examined cities by population and frequency of aggressive driving events. These events include speeding, hard braking, and rapid acceleration.

The report revealed that Atlanta drivers are 20 percent more aggressive than the average American driver.

For most of you reading, this doesn't come as much of a surprise. Our traffic is regularly ranked among the worst in the world.

Back in 2016, NerdWallet ranked Atlanta as the seventh most dangerous city to drive in due to the high number of car crashes and vehicle-related crimes.

Metro Atlanta drivers are 40 percent more likely to be in a car accident. The metro area averages 10.7 fatal accidents per 100,000 drivers.

Traffic is bad, Atlanta drivers are reckless, and the sky is blue. That's just the way it is. Or so it would seem.

As much as native Atlantans try to pin the blame on transplants and out-of-state drivers, we all share the road and can improve our driving culture to reduce collisions and save lives. Southern hospitality shouldn't cease once we get into our cars.

What Is Aggressive Driving?

First, aggressive driving isn't the same as assertive or defensive driving. It's defined by the AAA Foundation for Traffic Safety as "[a]ny unsafe driving behavior, performed deliberately and with ill intention or disregard for safety..."

Up to 56 percent of fatal crashes involved aggressive actions. Here are some examples of behaviors classified as aggressive driving:

Understand, however, that aggressive driving isn't the same as road rage.

Road rage is what happens when aggressive driving behavior escalates into a violent criminal act with the intent to cause a person or their vehicle harm.

The reasons are often trivial, ranging from not being allowed to pass to being nearly run off the road.

How to Avoid Becoming a Victim of Aggressive Driving

You can't control what other people do on Atlanta's roads but you can choose how you react to it and how you treat other drivers. There are four specific driving offenses that seem to enrage people the most: being cut off, driving slowly in the left lane, tailgating, and gestures.

When you merge, make sure you have plenty of room and use your turn signal. If you see someone needing to merge, give them enough space to do safely. Driving is not a race; help each other get to where each of you needs to go safely.

If you are in the left lane and someone behind you is going faster than you and wants to pass, move over. Just because you are traveling the speed limit does not mean you are in the right. Not only is this common courtesy and prevents traffic from clogging up behind you, but it's also the law in the state of Georgia.

Tailgating can cause other drivers to become stressed out and angry. It can even cause them to become distracted because they're worried about how close they're being followed. Keep two seconds between you and the car in front. If you feel the car is going to slowly, slow down and give them more room. Following too closely could endanger you if the car in front of you does something unexpected.

Gestures, yelling, even shaking your head or tossing up your hands should be avoided. Be patient. Save your horn for moments of potential danger to warn another driver. If a driver really wants to go first or take that parking spot, let them have it. It's not worth fighting over.

Protect yourself against aggressive drivers by refusing to retaliate. Think about your safety and the example you're setting for others. If an aggressive driver is harassing you or being reckless: steer clear, avoid eye contact, and, if necessary, get help.

Stay away from an aggressive driver. Create distance between you and them, and get away as quickly as possible. Never pull over and confront them in person.

One of the easiest things to do is to avoid eye contact with an angry driver. Staring or looking can turn things personal fast. Keep your eyes on the road ahead, even if you feel like the angry driver is looking at you or trying to get you to look at them.

In the worst case scenario, a driver may try to follow or fight you. Call the police. If you don't have a phone, get to a place where there are people around and use your horn to get other's attention. Don't get out and don't go home.

Adjusting your mindset while driving and having a more relaxed attitude can really improve your driving experience. Remember: stop racing and practice empathy.

Driving is not a race. Is passing that slow driver really that important when there's a wall of traffic 100 feet ahead? If you find yourself frustrated because you're running late, implement better time management strategies such as leaving for work early and having alternate routes. Listen to music, an audiobook, or practice relaxation techniques. Try slowing down as well. It's easier to relax while driving at 65 mph than it is at 75 mph on the highway.

Remember, that person who cut you off may be rushing to a personal emergency or freaking out because there's a spider in their car. Even if the other driver doesn't have a good reason for their aggressive driving, don't take it personally.

What to Do If an Aggressive Driver Hits You

Aggressive driving contributes to five million collisions every year and more than 50 percent of fatal accidents are caused by aggressive drivers.

If a driver's reckless decisions triggered a crash, make sure you are okay first. Then, call the police as soon as you are able.

Don't confront the other driver in anger. Calmly exchange your information with them if they are still at the scene. If they are angry or threatening you, remain in your vehicle if it is safe to do so.

An aggressive driver may refuse to hand over information, intimidate you, demand an apology or tell their insurance company the wreck was your fault.

If you're seriously hurt and the other driver or their insurance company is trying to stall or deny your insurance claim, contact Gary Martin Hays & Associates as soon as possible for a free review of your case.

Aggressive driving is a dangerous practice and has no place on the streets and highways of Metro Atlanta.