An Atlanta Attorney on the Best Ideas to Avoid Bicycle Accidents 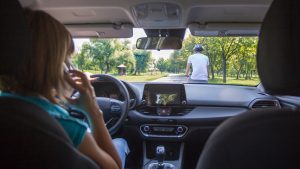 More residents throughout Atlanta are discovering the economic and health benefits of bicycling, as opposed to getting around by car. In fact, bicycling has grown significantly within the last 10 years.

In 2016, the city finally made the top 50 most bike-friendly cities in the United States - ranking at number 43. While this is good news, that ranking doesn't necessarily fare well in comparison to cities that promote a more bicycle-friendly culture.

According to the National Highway Traffic Safety Administration (NHTSA), roughly 45,000 bicyclists were injured, and 818 killed in 2015.  Statistically speaking:

In a recent video, we discussed how bicyclists and drivers can prevent accidents from occurring. We were joined by Kevin Avery, bicycling enthusiast and host of the Kevin and Taylor Show (104.7 The Fish Atlanta).

He first discusses the three-foot distance drivers should give bicyclists.

Avery also provides other tips for motorists when in the proximity of a bicyclist:

In addition, Avery suggests that bicyclists make themselves visible by wearing bright clothing and installing lights and reflective tape.

While not required by law for bicyclists over the age of 16, it's highly recommended to wear a helmet. This can mitigate the risk of sustaining a severe or life-threatening head injury.

Bicyclists have just as much right to the road

Like many other cities throughout the US, a culture of bicycle safety must be adopted. Bicyclists have every right to ride on roadways, just like passenger vehicle drivers do. In fact, Georgia law defines bicycles as vehicles.

In addition, O.C.G.A. Section 40-6-144 states, "Except as provided by resolution or ordinance of a local government, no person shall drive any vehicle upon a sidewalk." Therefore, any bicyclist over the age of 12-years-old is required to ride in the road.

We know that most bicyclists obey the rules of the road. In most cases, it's drivers who violate road rules and put bicyclists in danger. Bicyclists are often struck by drivers who are distracted, speeding, or driving under the influence of drugs and alcohol.

In many cases, drivers engage in outright hostile behavior towards bicyclists. They may intentionally swerve at bicyclists, attempt to run them off the road, or throw objects at them. This can lead to criminal charges against drivers for harassment and reckless endangerment.

If you or a loved one was hurt because of a driver's careless or reckless behavior, you have legal rights that should be upheld. You can start by contacting the Law Offices of Gary Martin Hays & Associates, P.C. Our legal team will review the details surrounding your crash and devise a legal strategy to maximize your compensation.