Most of us know of or have heard of the Black legal titans such as Thurgood Marshall and Clarence Thomas who broke historical and racial barriers. But few of us have heard the names and deeds of local lawyers and justices who managed to succeed even with steep odds stacked against them. 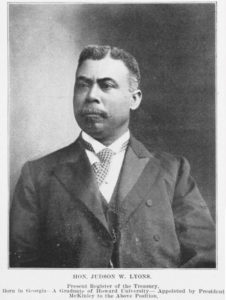 Lyons was born in Burke County, Georgia, before the outbreak of the Civil War. He taught himself to read and write. His family later moved to Augusta where he attended the Augusta Institute. As a young man, he became involved with the Republican Party and was selected as a delegate in 1880. He graduated from Howard University’s law school in 1884.

After graduating, Lyons returned to Georgia and fought to be admitted to the state bar. He succeeded, becoming one of the few Black lawyers to be licensed as a lawyer in the state (fewer than 10 African Americans in any given year were licensed lawyers in Georgia before WWI).

A strong supporter of William McKinley, the president appointed him as the Registrar of the Treasury in 1898. The appointment made him one of the highest-ranking Black men in government and his signature appeared on all currency issued by the federal government.

Lyons eventually returned to Georgia and continued to play an active role in politics. When Georgia began implementing legislation to disenfranchise Black people of their voting rights, Lyons worked to oppose these measures and founded the Georgia Equal Rights Association.

Pruden was born in Atlanta, Georgia. She attended Atlanta Public Schools and graduated from Atlanta University. She studied law under Attorney A.T. Walden (a notable civil rights and voting enfranchisement leader) while working as his secretary. 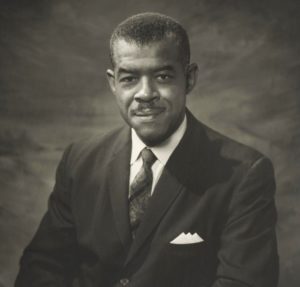 Born in Wichita, Kansas, Hollowell decided to pursue law after experiencing discrimination while serving in the U.S. Army during WWII. He earned his law degree in 1951 from the Loyola University Chicago School of Law and set up his own law practice the following year (today it is known as Hollowell, Foster & Herring, P.C.).

He became renowned for fighting against racial segregation in Georgia. Hollowell sued the University of Georgia for racist admission policies. The suit ended in 961 after a federal court ordered the school to admit two Black students.

In 1960, he and his co-counsel Horace Ward won a victory in the Georgia Court of Appeals to release Rev. Dr. Martin Luther King Jr. from prison. He and his firm also prevented the execution of a 15-year-old Black child five days before the scheduled date. Hollowell and civil rights icon C.B. King defended Dr. King and hundreds of other civil rights activists during what became known as the Albany Movement, a desegregation campaign that worked to challenge all forms of discrimination in the city.

By 1966, President Lyndon B. Johnson appointed Hollowell to be the regional director of the Equal Employment Opportunity Commission (EEOC), a government agency that monitors discrimination in the workplace. He remained there for nearly 20 years.

In 2002, the University of Georgia awarded him an honorary Doctor of Laws degree. The City of Atlanta also renamed Bankhead Highway (U.S. 78) to Hollowell Parkway in his honor. 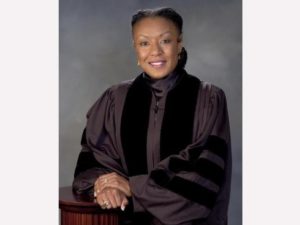 Sears was born in Heidelberg, Germany to Colonel Thomas Sears and Onnye Jean Sears. She grew up in Savannah, Georgia, her teenage years influenced by the tumultuous social changes of the 1960s. “If you were a teenage Black girl growing up in the Deep South, you weren’t supposed to amount to anything,” she recalled.

With support from her family and an inner desire for change, Sears forged her path to becoming the first African-American woman to serve as chief justice of any state supreme court.

U.S. Supreme Court cases such as Brown v. Board of Education, which declared segregated schools unconstitutional, and Loving v. Virginia, which ended restrictions on interracial couples marrying, inspired her. She viewed law as a way to make positive change happen.

Sears was the first Black cheerleader at Savannah High School and then transferred to Beach High School, graduating a year early. From there, she graduated Cornell University, then from Emory University’s law school in 1980, and finally earning a Master of Laws from the University of Virginia.

She worked at an Atlanta law firm until she became a judge on the City of Atlanta Traffic Court. For many years she worked as an adjunct law professor at Emory and the University of Georgia.

In 1988, she began serving as a Fulton County Superior Court Judge, the youngest person ever elected to a superior court seat at the time. By 1992, Governor Zell Miller appointed her to the Supreme Court of Georgia. Not only was she the youngest person to sit on the court, but also the first woman.

Justice Sears earned a reputation as astute, thoughtful, and committed, qualities that led her fellow justices to elect her as chief justice in 2005.

Sears retired from the bench in 2009 and now works in private practice at Smith, Gambrell & Russell, LLP. 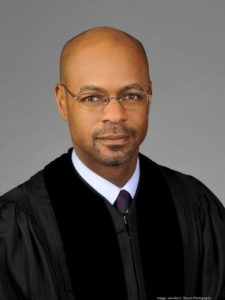 Melton was born in Washington D.C. to Carole Melton and Augustus Melton Jr., the first Black person to manage what is now Reagan International Airport. He grew up in East Pointe and Marietta, Georgia. In 1985, he attended Auburn University and served as the first person of color elected as president of the student senate.

In 1991, Melton earned his J.D. degree from the University of Georgia. He returned to Alabama after accepting the position of Assistant Attorney General in the Fiscal Affairs Division. By 1998, he was overseeing the Consumer Interests Section in the Georgia Department of Law.

Governor Sonny Perdue appointed him as his Executive Counsel in 2003. Two years later, he was appointed to the Supreme Court of Georgia.

Melton became the chief justice in 2018. After 16 years on the court, he is set to retire later this year.