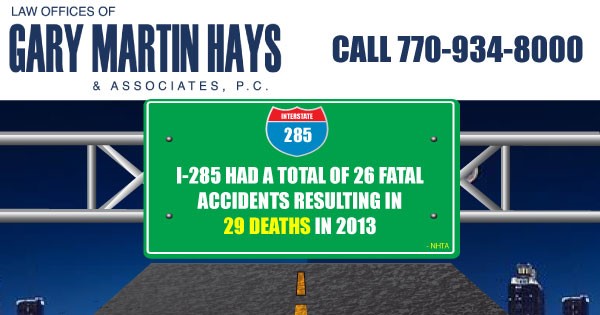 Stretching a little under 75 miles in Georgia, Interstate 285 has been named the No. 1 deadliest interstate in the U.S.

According to the National Highway Traffic Association, the interstate surrounding the city of Atlanta had a total of 26 fatal accidents resulting in 29 deaths in 2013.

That's approximately 3.5 accidents per 10 miles - higher than any interstate in the nation.

There have been several high-profile deaths this year on I-285. In January, a 53-year-old woman lost her life after being hit by multiple vehicles while crossing the westbound lane. Two weeks later a 28-year-old man who pulled over into the emergency lane was fatally injured after being struck by a car.

This recent study ranked Georgia the 7th worst state in the country for fatal car accidents, according to its 1,085 incidents in 2013. Currently, Georgia has lost 1,170 lives to fatal car accidents this year. If this loss of life continues, Georgia could surpass last year's accident death toll causing the first rise in fatal accidents in nine years.

Remember, a car accident can happen in an instant. And your life and the lives of others can change forever due to that accident.

Stay alert on the roadways, don't text and drive and buckle your seatbelt every time you get behind the wheel.